Pau Gasol decided the victory of the Los Angeles Lakers face the Atlanta Hawks (105-103) with two free throws to lack of six seconds and a cork virtually on the Horn to a desperate throw of Kyle Korver, who had led the comeback of their own with a perfect 6/6 in triple.

The Spanish, despite his bad shooting night (5/18), finished with 16 points and 13 rebounds, while Belgian Xavier Henry maintained his good level with many 18.

Korver recorded 22 points and the Dominican Al Horford contributed 12 so many and 16 rebounds for the Hawks.

It is the eighth consecutive victory for the angels over the team of Georgia at the Staples Center.

Up to eight local players scored triple, as it was the case in the debut this season against the Clippers.

The entry of Henry in the original quintet of Mike D’Antoni at the expense of Nick Young was noted and its hunger and shamelessness infected the rest of their colleagues to sign an inspired start (25-12), with great moments of Steve Nash and Gasol, despite the two triple Korver.

D’Antoni sitting a Young decision seemed to sit well to the player, who was much more concentrated and successful that in previous meetings and it was perfectly understood with Jordan Farmar and Jodie Meeks to launch his team in the second quarter (44-23).

The 11 players used Angeleno coach had scored at least one basket in the first 18 minutes, when reached by a percentage greater than 70 percent in triples (8/11).

Mike Budenholzer team was blocked and was able to react printing more intensely to his defense while Horford and Mike Scott reserve returned something encouraging his people to rest (62-49).

Despite the stunning Matt Gasol one-handed over Horford with which began the second half, the Lakers looked at how their percentages of shot, something that took the Hawks to reduce the deficit below 10 points (72-65) were worse after a triple by Cartier Martin.

With a stellar Horford seconded by Jeff Teague base and the power forward Paul Millsap, the whole of Georgia offered its best version by launching the counterattack, displaying his athleticism and preventing Gasol to work freely in the area, but when they put worse things for locals, Henry responded with a triple and Chris Kaman recovered the domain under hoops.

However, the irregularity in the Los Angeles attack, product of the constant rotations, allowed Atlanta approached once more, this time with much more danger than the previous ones.

Nash and Gasol returned to the track, this time accompanied by an almost unprecedented Jordan Hill, but the extraordinary work of Korver and Teague made alarm bells ringing at the Staples Center and demanded that his rival until the last breath, tying the shock to 103 in the absence of 35.3 seconds.

Gasol took responsibility and failed a hook. Hill picked up the rebound and the ball came back to the Spanish, who forced a Millsap staff before scoring two free throws in the absence of 6 seconds. Korver, who otherwise, he took up the challenge, but this time its desperate launch found the wall of Gasol.

http://thesportsunion.com/gasol-decides-the-suffered-victory-for-the-lakers-vs-atlanta.html2016-10-02T06:12:37+00:00JackNBASports Newsatlanta hawks,lakers vs. atlanta,los angeles lakers,pau gasol,victory of lakers
Pau Gasol decided the victory of the Los Angeles Lakers face the Atlanta Hawks (105-103) with two free throws to lack of six seconds and a cork virtually on the Horn to a desperate throw of Kyle Korver, who had led the comeback of their own with a perfect...
JackJack 123morshedsarwer71@yahoo.comEditorSports Union 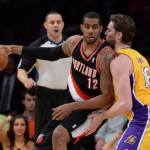 The Blazers beat the Lakers in the return of Pau Gasol

The Lakers and Pau recovered joy to beat Pistons