The news of the fall of the star guard Russell Westbrook, again operated right knee, did not affect the mood of the winner of Oklahoma City Thunder who came to Charlotte and beat the Bobcats 85-89 home in League match U.S. Basketball (NBA)

Although he had to suffer more than necessary, again the forward star Kevin Durant was commissioned to be the leading scorer for the Thunder to make a double-double of 34 points, 12 rebounds, including 10 defensive and distributed six assists.

Swiss Guard Thabo Sefolosha increased its participation in the offensive play of the Thunder and contributed 12 points, including the two which attained from the line staff in the absence of three seconds to end regulation time and that secured the victory, the 12th in the last 13 matches that played Oklahoma City. 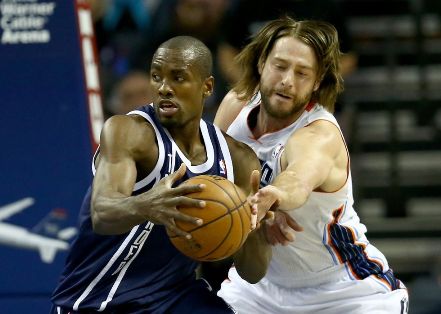 The Congolese power forward, nationalized Spanish, Serge Ibaka, also contributed 12 points, nine rebounds and was important in the work done by the Thunder under the rings.

Ibaka played 36 minutes, which most after Durant (40), and scored 6 of 8 shots from the field, failed an attempt to triple, and seven of the nine rebounds were defensive, put three plugs and gave two assists.

The basis of Reggie Jackson, who held the post of head of Westbrook, and the escort booking Jeremy Lamb, they scored 10 points each and completed the list of five players who had two-digit numbers.

While the pivot Kendrick Perkins also did an excellent job in the game under the basket to capture 10 rebounds and put a plug.

Jackson felt the pressure and the responsibility of his position as owner of Westbrook and did not have his best encestadora inspiration break-down no fewer than 15 of 19 shots from the field and also shone in the facet of the distribution of the game.

Westbrook was operated today in Los Angeles of the right knee and will be down to the 63 Edition of the all-star game, which this season will take place in New Orleans, Sunday, February 16, 2014.

Despite the suspense that occurred in the final outcome, the victory allowed the Thunder to 24-5, best record in the NBA, tied with the Portland Trail Blazers, who were the first to get win number 24 in so far this season.

Base Kemba Walker led the attack of the Bobcats once again to get 18 points and seven assists, but could not prevent the fifth defeat suffered the Bobcats (14-16) in the last 10 matches played.

The pivot to the Jefferson got a double-double of 16 points and 11 rebounds, while guard Gerald Henderson and the power forward Josh McRoberts added 14 and 13 points, respectively.

http://thesportsunion.com/ibaka-and-durant-give-victory-to-a-few-thunder-without-westbrook.html2016-10-07T04:57:47+00:00JackNBASports Newsdurant,ibaka,josh mcroberts,oklahoma city thunder,thunder,westbrook
The news of the fall of the star guard Russell Westbrook, again operated right knee, did not affect the mood of the winner of Oklahoma City Thunder who came to Charlotte and beat the Bobcats 85-89 home in League match U.S. Basketball (NBA) Although he had to suffer more than...
JackJack 123morshedsarwer71@yahoo.comEditorSports Union

Ibaka, expelled for a fight with Blake Griffin and Matt Barnes

Ibaka is enlarged in Dallas