Nothing stops the San Antonio Spurs, who claimed before the Grizzlies are the current champions of the Western Conference to win by 102-86 in the FedExForum in Memphis.

Once again, the French base Tony Parker was responsible for directing master game of the Spurs Team to score 20 points and distributed five assists. Along with Parker, who headed a list of four players who had two-digit numbers, Brazilian Center Tiago Splitter, to the injury suffered by the Spanish Marc Gasol, dominated in the game within the painting and contributed 17 points. Splitter played 26 minutes in which scored 7 of 10 shots from the field and was perfect (3-3) from the line of personnel, captured seven rebounds – four were defensive-, put a Plug and gave assistance.

But as always, the decisive victories in could not miss the contribution and the geniuses of veteran Argentine guard Manu Ginobili, as reserve scored 15 points and became the sixth player of the match. Ginobili played 27 minutes in which scored 6 of 13 shots from the field, included 3 Triple 7, handed out seven assists – the team-leader, and captured five rebounds. Kawhi Leonard eaves also was instrumental in the work of team to the with 12 points, nine rebounds, three assists and recovered three balls.

Veteran Center Tim Duncan also did its job of player tags within the team by contributing eight points, six rebounds – all defensive-he handed out four assists and put two plugs.

The party that was tight until the middle of the fourth period when the Grizzlies were just one point below on the scoreboard (78-79) broke in favor of the Spurs ended with 23-8 streak.

The Grizzlies lost not only the game, but were also down by injury of Gasol, who had to leave the field to do damage in the left knee to collide with the power forward Jeff Ayres when marked him. Gasol was immediately grabbed the knee with the hand, was against the Grizzlies basket stand and left the field for his own foot, but not already returned in throughout the game.

The Grizzlies did not know the extent of the injury suffered by Gasol and said that that know it when tomorrow, Saturday, do you a magnetic resonance imaging test. Before falling injured Gasol could play 10 minutes in which contributed two points (1-3, 0-0, 0-0), handed out three assists, captured two rebounds and lost a ball?

Without Gasol in the field, the Grizzlies lost the greatest number of possibilities that had to have gotten the victory and although the base Mike Conley contributed 28 points and the power forward Zach Randolph achieved a double-double of 16 points, 10 rebounds, three assists and ball recovery, was not enough to avoid defeat.

The Grizzlies (7-6), which broke a streak of four consecutive triumphs that had achieved in his West Coast tour, lost the sixth match followed in the duel against the Spurs, including those who had last season in the Western Conference finals.

The Spurs swept the Grizzlies in the finals (4-0) and the inaugural match of the new season, which took place in San Antonio, also won by 101-94.

http://thesportsunion.com/marc-gasol-falls-injured-and-memphis-added-another-defeat.html2013-11-23T09:09:46+00:00JackNBASports Newsgrizzlies,marc gasol,marc gasol injured,san antonio spurs
Nothing stops the San Antonio Spurs, who claimed before the Grizzlies are the current champions of the Western Conference to win by 102-86 in the FedExForum in Memphis. Once again, the French base Tony Parker was responsible for directing master game of the Spurs Team to score 20 points and...
JackJack 123morshedsarwer71@yahoo.comEditorSports Union 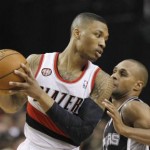 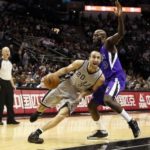