The former world champion Filipino Manny Pacquiao last night suffered the most spectacular knockout, dramatic and frustrating his brilliant boxing career struck by falling to the canvas one second before the end of the sixth quarter assault that disputed rematch against Mexican Juan Manuel Marquez .

Pacquiao, 33, acknowledged that what happened is part of the sport of boxing and as such had to accept it. “did not have sufficient precaution against an opponent not easy as demonstrated in the 42 rounds we’ve played since last 2004” said Pacquiao. “I did my best in the ring, but this is the sport of boxing. This is sport,” he said. 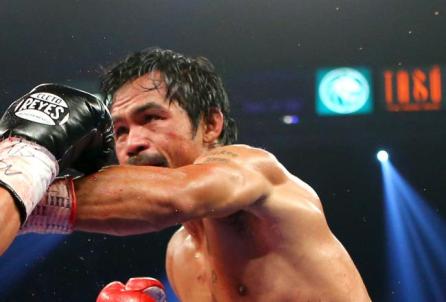 Pacquiao, who took a bag of $ 25 million after conceding the second consecutive defeat after last June also lost with American Timothy Bradley said he had made a good fight until he put right Marquez wrecking left him knocked out.

“He dominated the fight and had met several times with powerful punches in the last two rounds, but the final blow was looking for and I never thought that I was the one who would receive, “said Pacquiao, who fell to the canvas a few meters where he was watching the fight the Republican former presidential candidate Mitt Romney and his wife Ann.

“It was a good hit on the break, but I was able to recover without problems and regain control of the fight. The second shot, just not what I expected or what I saw,” he said.

The preparer and Pacquiao trainer Freddie Roach also highlighted the great revival that took his ward after falling first to the canvas.

“Manny (Pacquiao) reacted very well after the first fall, and returned to take control of the fight. Simply was what happened after that was a little carelessness, but Marquez was very touched and pulled until the final blow,” said.

The big question now about the future of Pacquiao is whether to continue in boxing and if you really want a fifth fight against Marquez.

He who has already clear is the veteran promoter Bob Arum. “Now I think that if it can be feasible, but will have to wait and see how they react to the proposal both fighters,” said Arum, Pacquiao confirmed that at the conclusion of the match went to a local hospital in Las Vegas for that they should make a medical .

Arum believes that fifth fight could be as or more “interesting” than before and Pacquiao also considered in the same way.

“Why not? Believe this has been a good fight, I felt confident I could win, so if they give us the opportunity to fight again, we will, no problem. Now I will rest and then again fight,” he said.

http://thesportsunion.com/pacquiao-fighting-again-we-do-not-issue.htmlhttp://thesportsunion.com/wp-content/uploads/2012/12/pacquiao.jpghttp://thesportsunion.com/wp-content/uploads/2012/12/pacquiao-150x150.jpg2016-10-07T15:33:18+00:00JackBoxingfuture of pacquiao,news for pacquiao,pacquiao against marquez,pacquiao fight again,pacquiao news
The former world champion Filipino Manny Pacquiao last night suffered the most spectacular knockout, dramatic and frustrating his brilliant boxing career struck by falling to the canvas one second before the end of the sixth quarter assault that disputed rematch against Mexican Juan Manuel Marquez . Pacquiao, 33, acknowledged that...
JackJack 123morshedsarwer71@yahoo.comEditorSports Union
Lillard and Hickson give the fifth straight win for the Blazers »