Peugeot has decided to return to the most important competitions in which years ago participated in an official way and in which shone with memorable victories. After the Pikes Peak, repeated with success and record, 2015 is the year that Peugeot will return to the toughest rally in the world, the Dakar.

As he told us Chema this morning, 2015 it will be year in which Peugeot return to Dakar. After harvesting the success on the climb to Pikes Peak’s last year with the Peugeot 208 T16 of Loeb, Peugeot has encouraged to return to one of the competitions most hard and important in the world, where once shone. 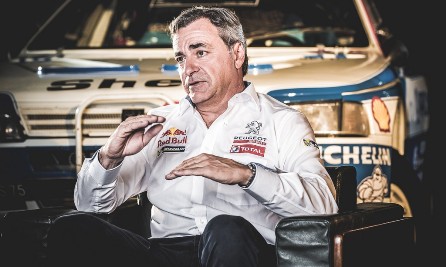 Maxime Picat has confirmed that Peugeot Sport, along with Red Bull, and Total will make every effort to stand up to rivals harder to Dakar in 2015. Let us hope that in this way the Dakar can be more MINI hegemony and Giniel de Villiers to fighting against them. And if not included Carlos Sainz in the fight, since the Spanish will beat in the duel behind the wheel of a Peugeot car. His team mate and also pilot will be Frenchman Cyril Despres, with many Dakares in motorcycles to their backs.

The presence of Peugeot in the Dakar is one more long-term strategy, but from the next edition the French will fight like Lions for refilling sand palm grove of the mark, which won its last Dakar in 1990 with Ari Vatanen at the controls of his Peugeot 405 T16.

It is no secret that Peugeot, as any brand, attends the Dakar by the image that contributes to the brand, especially in some strategic markets brand. It is irrelevant that Peugeot (or MINI) do not have minimum spirit Dakar street cars.

Sainz and Despres, the experience is a degree

Peugeot is intelligent and knows that to win the Dakar it needs people with experience, leading pilots. Since the end of the Dakar 2014 we have heard that Peterhansel be Peugeot driver, so it has caught us with some surprise the fact that one of the pilots, along with Carlos Sainz is Cyril Despres.

Both are pilots with proven experience in Dakar, and both winners. Despres is one of the best bikers of the Dakar, but that is not a problem. The two top drivers in 2014, Nani Roma and Peterhansel began as bikers.

Now we only need to know the car, which for the time being Peugeot shows us in the form of teaser. Especially Sainz will be a key piece to tune the vehicle, since he has competed in the Dakar with total and rear traction cars.

At the moment we know that this will be a 2008 Peugeot, or something that resembles it and that hide a tubular chassis and thousands of engineering hours. Certainly this SUV B Grip Control is not enough for the toughest test of the world of the motor.

http://thesportsunion.com/peugeot-returned-to-dakar-in-2015-official-information.html2014-03-27T11:47:50+00:00DanielDakarSports Newsnews for peugeot dakar,peugeot dakar,peugeot dakar racing,peugeot dakar return
Peugeot has decided to return to the most important competitions in which years ago participated in an official way and in which shone with memorable victories. After the Pikes Peak, repeated with success and record, 2015 is the year that Peugeot will return to the toughest rally in the...
DanielDaniel jahid.bd3698@yahoo.comAdministratorSports Union
« Marc is injured in the defeat of Memphis to Miami Heat
Griffin is injured the day that Chris Paul dominated the Rockets »