“It has saved our season,” word of James Harden. Sport lives of magical, unexpected stories. Stories of overcoming tragedy and rehabilitation, stories of opportunity exactly placed on the fate of a person and used in a way that is so wild that it frightens even count them. One of these magical stories is that of the triple Troy Daniels. Remember this: “Troy Daniels triple”: because within two, five and ten years will continue reminding “The Triple of Troy Daniels” as we remember so much unforgettable moments in the history of the NBA Playoffs.

“The triple Troy Daniels” decided a game crazy, as most of those that we have seen so far in the postseason. A party matched to rest, an encounter that Houston broke in the third quarter and Mo Williams and Damian Lillard were commissioned to go to take it to extra time. There appeared “The Triple of Troy Daniels”. We are going with this. 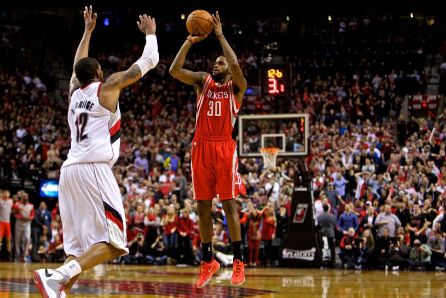 Chandler Parsons had been eliminated by fouls and the ‘Small Ball’ that Kevin McHale was using to counter that of Portland did pieces. The Blazers suffered the pressure of Asik and Howard to Aldridge, so Stotts decided to play with Aldridge just in the paint, forcing McHale to stay with Howard and Asik sitting. Lillard, Mo Williams, Matthews, Batumi and Aldridge against Beverley, Lin, Harden, Parsons and Howard, it was thus still until the high eaves (2.06) of the Rockets went to the bench. He joined Daniels (1.93), which had six points in 17 minutes that had been at the party. He saw from the insignificance of their role how Lillard was a very dangerous 116-112 in the absence of three minutes and how Lin and Harden, with two baskets, tied the game less than two minutes from the end. At that time, after several errors from both teams and an incomprehensible failed tray of Jeremy Lin who would be half-game, comes “The Triple of Troy Daniels”. There are 20 seconds, Harden is I’m losing the ball, several players are thrown to the ground and Lin manages to retrieve it, go to Daniels only, open to the left of the attack of the Rockets, and decides to give the pass, is 12 seconds. Troy rises and, as he had all season in the development League, gets three times. 116-119 to Houston, the “problem” is now less severe.

The history of Troy Daniels (Virginia, 1991) is summarized in four years of NCAA VCU (Virginia Commonwealth University) and not being chosen in the draft, the NBA last summer. With VCU mates reached the Final Four 2011, where lost in the semifinals against Butler while Daniels play a minute. After the 2013 draft, he participated in the summer League with the Charlotte Bobcats, and signed a contract with them to the end. That agreement lasted only ten days and ended on October 10, 2013. Secure that the day Troy, in the midst of the sadness to remain without a team; little does she know what fate had prepared a few months later.

On 18 October he signs with the Houston Rockets, who cut him eight days later, and already in November to reach an agreement with the big River Valley Vipers, from the development League. Affiliate Member of the Rockets team. Get there averaging 23.3 points, leading the League in triples scored, and plays its all-Star Game. After said all-star returns to sign with the Rockets, who at the time they send it back to the d-League, already on March 5, making his debut in the NBA. Since then, these almost two months until today, Daniels lives in a constant roller coaster, with minutes in the NBA, and parties in the d-League.

Play five games with the stars in the best League in the world. 76 minutes of learning and a good performance, on April 16 against the Pelicans, where scoring 22 points for a total of 32 “know” to “the Triple of Troy Daniels”. 76 minutes.

http://thesportsunion.com/the-miracle-of-an-unknown-troy-daniels-saves-the-rockets.html2014-04-26T07:36:48+00:00DanielNBASports Newsnba playoffs,rockets victory,troy daniels,troy daniels rockets,troy daniels triple
'It has saved our season,' word of James Harden. Sport lives of magical, unexpected stories. Stories of overcoming tragedy and rehabilitation, stories of opportunity exactly placed on the fate of a person and used in a way that is so wild that it frightens even count them. One of...
DanielDaniel jahid.bd3698@yahoo.comAdministratorSports Union
« Why Outdoor Sports Lovers Are Loving Heli Skiing
Lillard avoids the farewell of the Blazers and Spurs were let go »